Finally, a Fix for the Wastewater Crisis in the Alabama Black Belt

For decades, many residents of rural Alabama have grown accustomed to a problem no one should have to face:

The hard, clay-like Black Prairie soil – which gives this 17-county region its nickname as the “black belt” of Alabama – does not allow for the permeability of water from traditional septic tanks. With low population density, high poverty levels, and the rural nature of the homes making public sewer systems unfeasible,  residents have no option but “straight piping” systems that release sewage above the ground.

Sean Kearney was shocked when he first observed the situation.

“We watched water from a straight pipe go directly onto a garden, again and again, from the toilet flushing,” said Kearney, managing director of the IWSH Foundation, the philanthropic arm of IAPMO. “Where we were standing, a big pool of water built up on the ground. It was going nowhere.”

When it rains, the already dire situation turns into a nightmare. Because the Black Prairie soil can’t absorb the additional water, raw sewage bubbles up to the surface in residents’ yards and gardens. Or worse, the sewage backs up inside their homes, causing a foul-smelling, health-threatening mess in toilets and bathtubs.

“I will never forget several times I left home with that sewage acting up. And when I came back, sewage was everywhere,” said resident Perman Hardy, who lived with this situation for more than 30 years.  “I had small children, so we couldn’t even stay in the house until I got it cleaned up.” Eventually, her homeowner’s insurance stopped covering repair costs.

John Dillard, a plumber from UA Local 91, Birmingham, Alabama, who volunteered to help fix the problem, could not believe what he saw either. “Man, it’s amazing to see situations like this in my home state and to think we’re actually backing up instead of progressing forward,” he said.

Fortunately, Hardy, Kearney, and Dillard are part of a public-private partnership pooling talents and resources to solve this problem. Thanks to the Blackbelt Unincorporated Wastewater Program (BBUWP) and the Alabama Department of Public Health, supported by plumbing manufacturers LIXIL and Fuji Clean USA, and plumbing volunteers through the IWSH Foundation, this long-standing sewage problem is finally being addressed.

The twin problems of poverty and the local soil characteristics in the Alabama Black Belt region made it especially difficult to find a sustainable solution.

“Where 25-40% of households in the region are below the poverty line, high monthly water and sewer bills are a non-starter,” said Kevin White, Ph.D., P.E., a civil engineer and professor emeritus from the University of South Alabama who has been working on solutions for decades.

Meanwhile, residents simply installed straight pipes. Nothing was stopping them since there were no local building codes requiring that homes have safe wastewater solutions.

What Are We To Do?

Alabama Department of Public Health official Sherry Bradley remembers visiting a local homeowner who was installing straight pipes and trying to convince the resident not to do so. “I’ll never forget it, she said, ‘Well, what are we to do? The city hasn’t hooked us up. What are we to do?’” Bradley recalled.

“That really tugged at my heart. I’m an advocate now. We’re going to get this thing right,” Bradley says. She founded the BBUWP to increase proper wastewater disposal resources, installing and repairing on-site wastewater systems with the help of partners and donors. 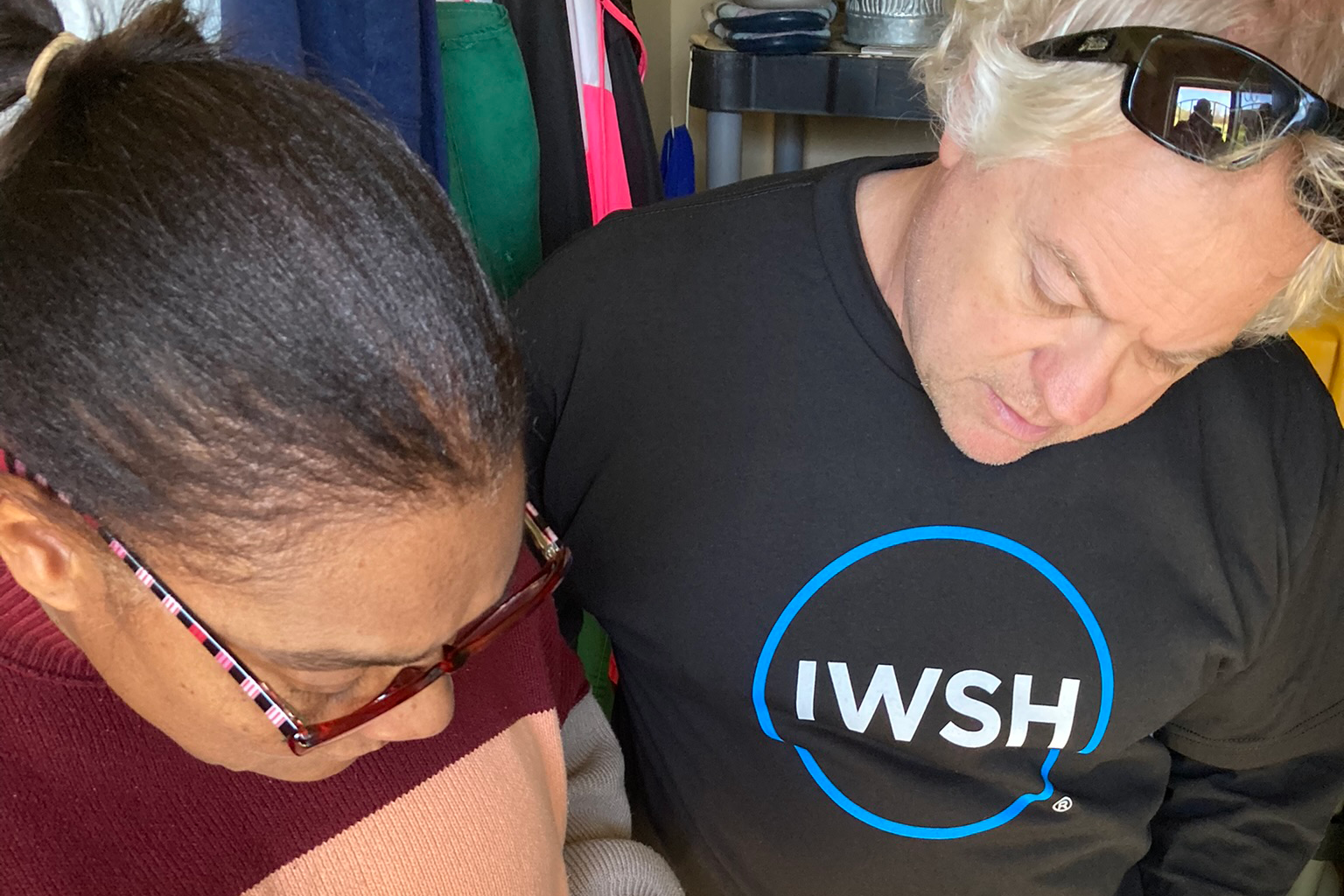 Hardy, who is now the president of the BBUWP, learned the extent of the problem when she worked as a home health aide, visiting homes around Lowndes County. “I started telling people, OK, we are speaking out. I’m speaking out for my neighbors and other people going through what I’m going through,” Hardy said.

After meeting Bradley, the two women started working together. While Bradley worked to secure public funding and strengthen local building codes, Hardy rallied her neighbors to support the efforts.

She remembers Bradley saying, “Perman, we are going to work together to find a solution.

Bradley and White traveled as far away as Alaska to research potential solutions because Alabama is not an isolated case. Similar situations exist in Hawaii, Alaska, Appalachia, California’s Central Valley, and the Navajo Nation, but poor sanitation exists in every state across the U.S.

Meanwhile, a news story about the Black Belt sewage crisis caught the attention of Troy Benavidez, leader of government relations and policy for LIXIL, the company that manufactures American Standard and GROHE brand plumbing products. “Our company has been in business for 150 years, and we’ve been solving sanitation problems around the world in underdeveloped countries,” Benavidez said.  “So when we have a problem like this, right in our backyard in the U.S., we had to figure out how to do something about it.

“At first, we thought maybe we could improve the toilet. But this is a whole system problem,” Benavidez notes. “We had to expand our scope of thinking.”

One solution is an innovative septic tank from Fuji Clean USA that cleans the wastewater, thus sending clean water into the soil. 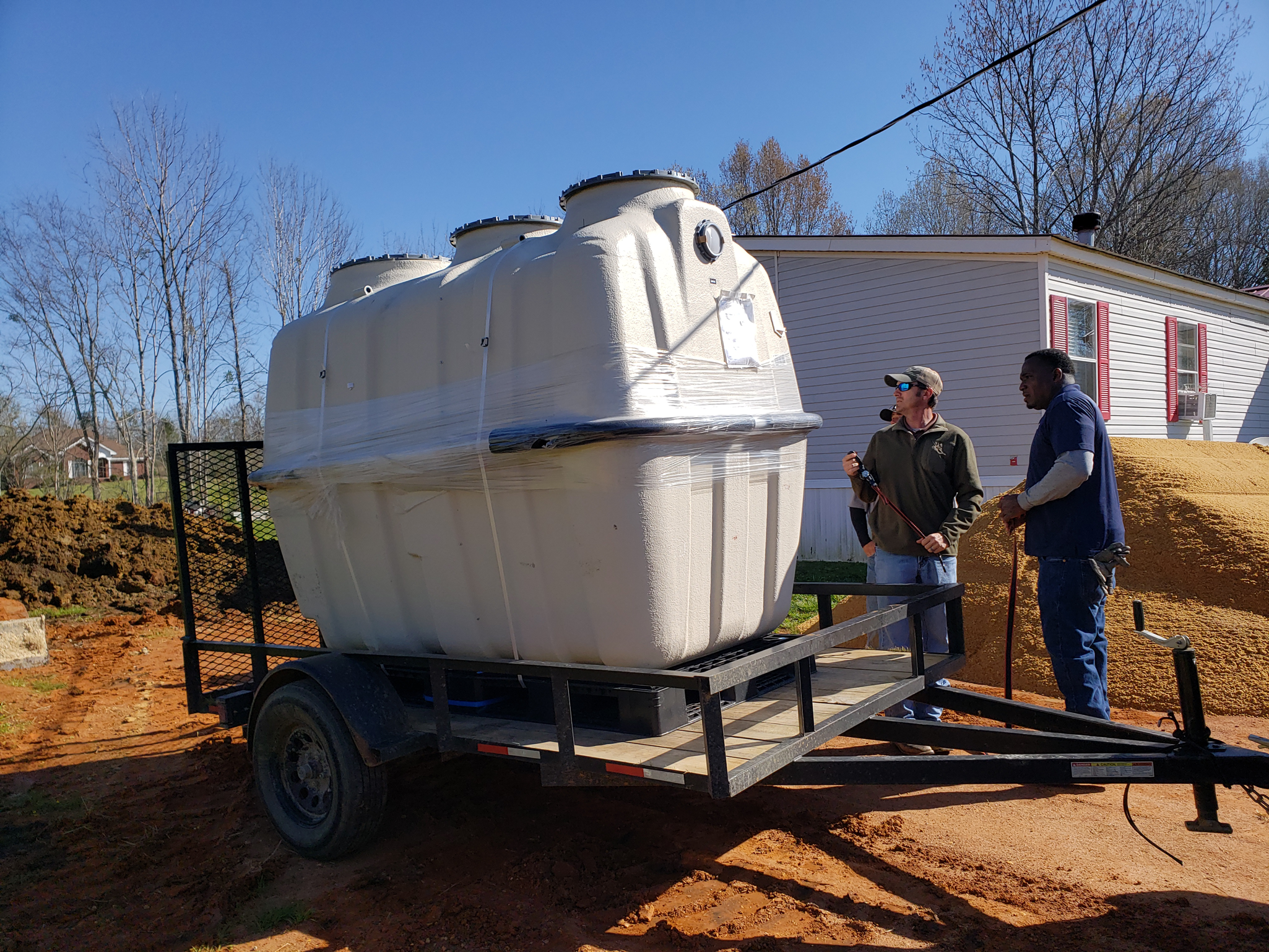 Hardy received the first Fuji Clean USA system in June 2021, a successful proof of concept intended to expand and eventually reach more than 100 Lowndes County residents. Public funds and private philanthropy will support the installation of this system, and other innovative systems like it. Maintenance is affordable for residents at $20 a month.

“I am thankful, very thankful,” Hardy said. “I want to see everybody be able to reach the benefit of what I am seeing for myself and my family.”

“That was a blessing to know that you can get something done, and all you have to do is pay $20 a month for the upkeep, said resident Culexie Gordon.

Why Water-Saving Fixtures Are Critical For Septic Systems

One way to keep septic maintenance costs low is to mitigate common septic problems by reducing the volume of wastewater entering the septic tank. Toilets, showerheads, and faucets that carry the WaterSense® label from the U.S. Environmental Protection Agency (EPA) are the ideal choice for all homes on septic systems. 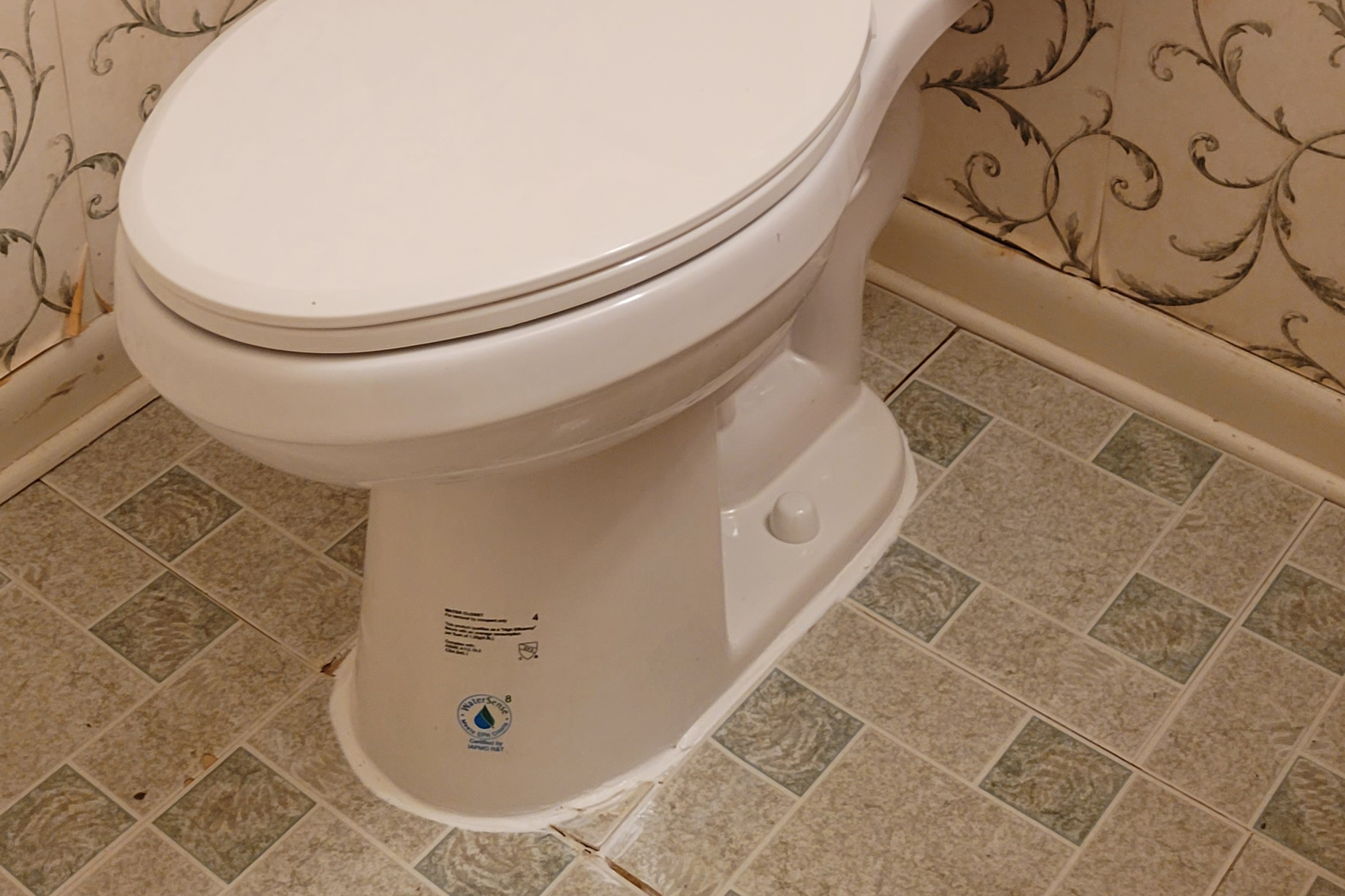 Beyond reducing stress on the septic systems, water-saving plumbing fixtures can save money on everyday water use. After Hardy received new fixtures when her Fuji Clean was installed, she saw the monthly water bill on her small farm decline by half.

Plumbers Protect the Health of the Nation

It takes a sanitation crisis on the scale of Lowndes County to underscore the role of plumbers in promoting public health.

Plumber Tim Pierce of Plumbers and Pipefitters Local, 91, out of Birmingham, Alabama

Indeed, plumbers are essentially public health workers. “It’s not just that they’re installing a toilet or a faucet,” Benavidez said. “Plumbers give people hope. They are my heroes.”

In addition to the fixture replacements, IWSH plumber volunteers addressed other issues, such as fixing water heaters, HVAC systems, and related plumbing and mechanical problems.

“The root and spirit of our trade is service. Seeing the gratitude and the relief of the homeowners reminds me that this isn’t just a job for us. It’s in our blood,” said Michael  Lavoie, a third-generation plumber who made the trek from California to participate in the initial installations after securing his Alabama plumbing license.

“To be here and help out with the Alabama pipe trades and unions, I couldn’t be more grateful to be involved.”

This philanthropic, public/private initiative has only just begun, with 170 homes in this section of Alabama’s rural, poverty-stricken region being slated for similar sewage system repairs over the next two years. 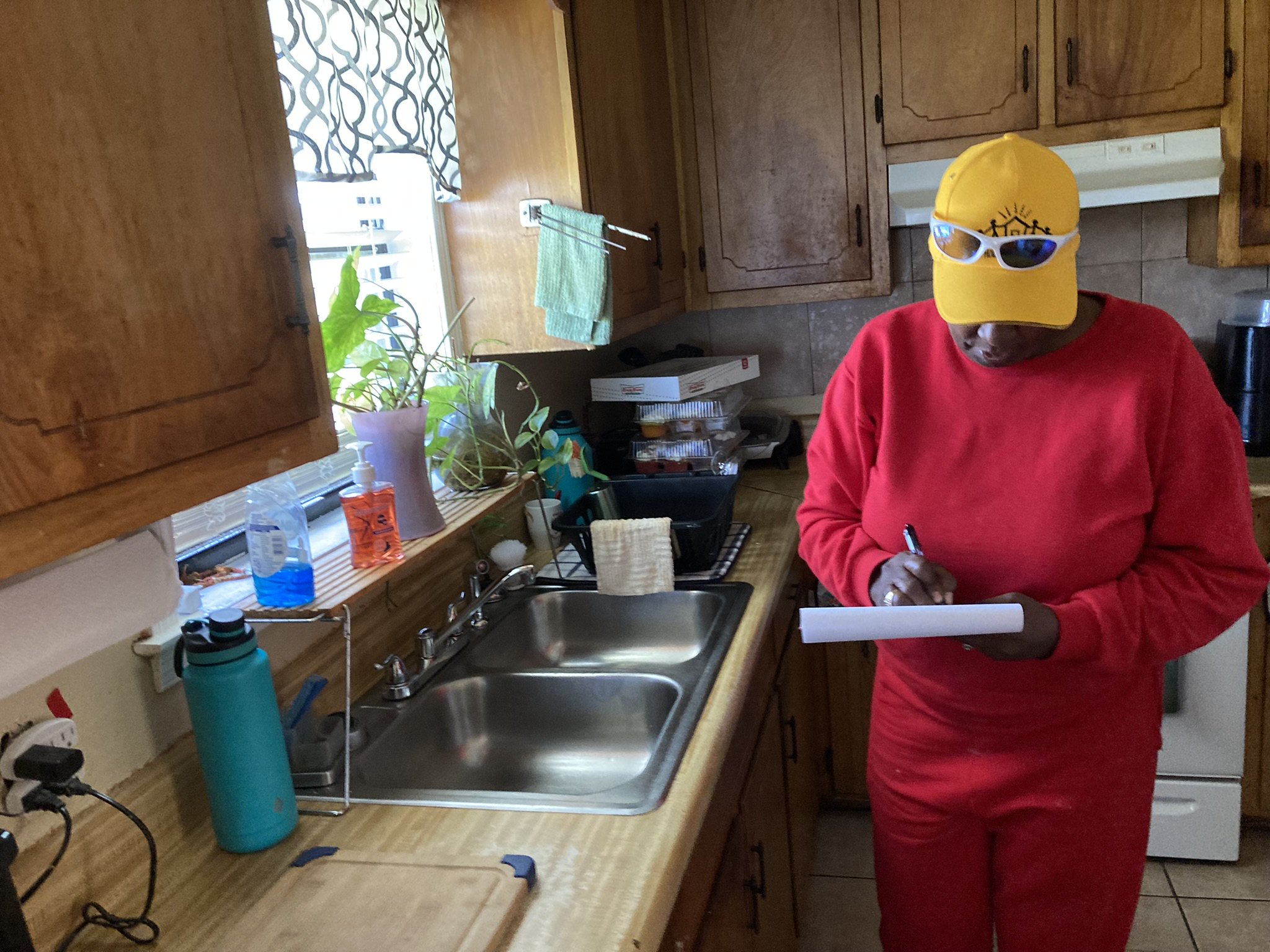 Perman Hardy makes notes about the interior plumbing work to be done at a Lowndes County resident’s home.

Besides the remediation efforts, the group is working to prevent water and sanitation problems from reoccurring in Lowndes County in the future, too. Working with state and local officials, BBUWP has strengthened local plumbing codes to require homes to have safe wastewater disposal.

“That requirement was not even on the books,” Bradley said. “Now it’s the law.”

The new systems also create jobs, not only for the initial installation but the ongoing maintenance needs.

Benavidez lauded all participants for coming together to creatively solve a long-lingering problem. “This was a collaborative effort from governments and private sector institutions, and volunteers. We have demonstrated that problems can be solved if you pull the right people together.”

Hardy believes that the work to transform her rural community will have long-lasting positive effects: “This is a better place. When our children go off to college, they’ll feel like they can come back to Lowndes County. And invest in Lowndes County.”

Finally, a Fix for the Wastewater Crisis in the Alabama Black Belt2022-05-092022-06-28https://www.uniformcodes.org/wp-content/uploads/2021/08/iapmo_mod_light_2.pngUniform Codeshttps://www.uniformcodes.org/wp-content/uploads/2022/05/al_cpc_vid.png200px200px
About
IWSH Foundation
Across the world, the International Water, Sanitation and Hygiene (IWSH) Foundation connects technical experts with local community networks to complete projects in water-stressed areas, enhancing washrooms, sanitation and hygiene through smart approaches and delivering data-driven results and real-world impact. We believe that clean water and sanitation are fundamental human rights, regardless of where you live in the world. IWSH is a registered 501(c)(3) Public Charity founded by The IAPMO Group.